Pea and ham, are like well… Two peas in a pod and this Pea and Ham Pasta recipe is quick simple and gloriously tasty!

As far as food combinations go pea and ham is as close as you can get to perfection if you ask me.

The sweetness of peas with the saltiness of ham is irresistible to me.

It is not the first time it has been used here featuring in both my pea and ham risotto and in this pasta with peas and ham in a broth recipe. It will also not be the last!

Using a pea puree as a sauce may seem unusual but it works really well. It is fairly light coats the pasta well and tastes fantastic.

My pea puree rarely changes and this is the same one that I use as a base sauce for my deep fried goats cheese.

This can be made with both fresh or frozen peas.

Chose whichever you can get your hands on, frozen peas are probably the best of all of the frozen vegetables.

What Pasta To Use.

I was really torn between making this Pea and Ham pasta recipe with some fresh pappardelle or penne rigatoni.

The final choice was governed by the fact that I need a new pasta machine.

Which is simultaneously very sad and very exciting and completely irrelevant to you!

This recipe works really well with a variety of different types of pasta.

Something wide and flat like pappardelle or tagliatelle or something like penne or rigatoni would work best.

This is because they will hold onto the sauce better than thinner long pasta and ‘bowl’ type pasta would not distribute it evenly enough.

At different times of the year I like to experiment with edible flowers in my recipes.

They are, of course, optional but they do add a bit of bling to a recipe.

But they are not just there for presentation, they actually add flavour to a dish.

In many ways, they are like a seasoning so you should choose your flowers appropriately.

The flowers I use in this pean and ham rigatoni recipe are lilac flowers.

They are perfectly safe to eat and are very floral in both aroma and flavour.

You should pick them as close to use as possible and they have an almost citrus-like flavour with a slight bitterness.

This is a perfect complimentary flavour profile to the sweet and salty flavour of the ham and pea. 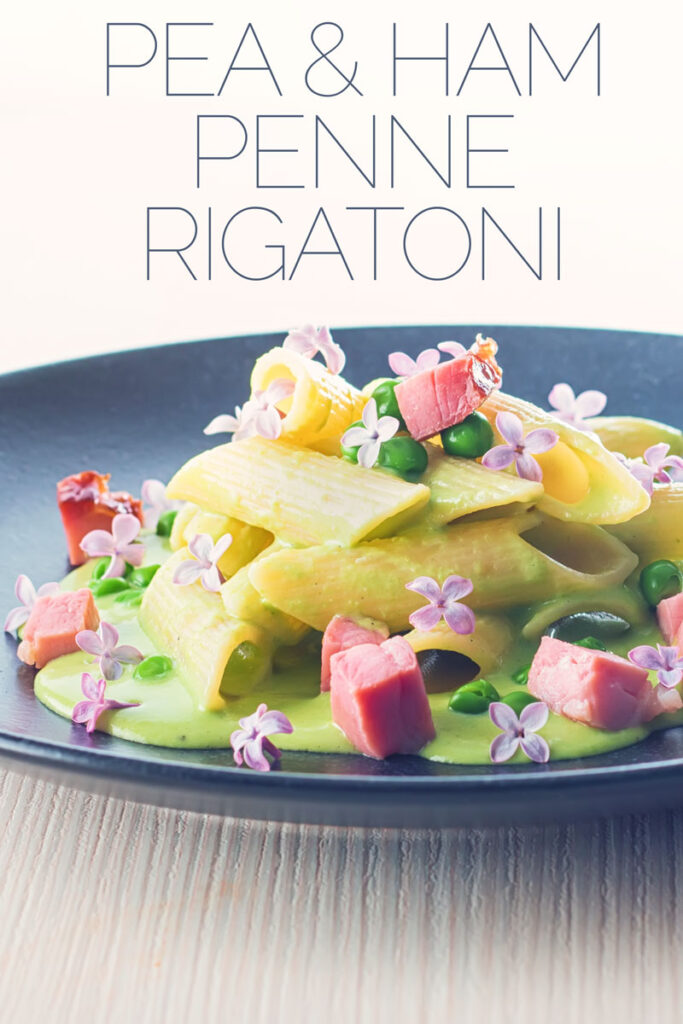