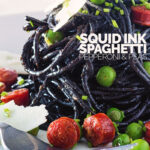 15-minute pasta recipes that look great and taste great need to be a part of every home cooks repertoire. This Squid Ink Spaghetti with Pepperoni and Peas has got to rank up there with my favourite mid-week quick dinners.

Oooh, look at the black pasta. I am loving using squid ink pasta at the moment. The silky almost velvet texture forms the bedrock of this stupidly simple pasta recipe.

It is one of those meals you can throw together really quickly with ingredients you have lying around.

I’ve always got some form of pepperoni or salami in the house, the same goes for peas! You could even swap it out for chorizo as I use in this chorizo pasta recipe.

You could even use regular spaghetti rather than squid ink spaghetti and this recipe will still taste ‘da bomb’. Do the yoof still say that? Probably not… Anyway, it will!

Squid ink has been used to colour food from Japan to Europe for Hundreds of years.

It adds more texture to pasta than flavour, which I talk more about in this spaghetti and shrimp recipe.

The Secret to Cooking Simple.

At its heart, this dish really is just some spaghetti with pepperoni and some peas.

In order for this to work you need the best ingredients you can. Cheap ‘value’ pasta or pepperoni will make this dish taste pretty crappy!

That really is the key to simple dishes… Great ingredients! There is nowhere for cheap ingredients to hide when we are cooking with so few ingredients.

It is the same ethos behind another of my squid ink pasta recipes with bacon and spinach.

I also swear by fresh locally grown stuff, so local much of it comes from my garden.

But this recipe also shows that good frozen vegetables can make a really great meal too and peas are the granddaddy of frozen veg for me.

Looks classy but takes 15 minutes, this Squid Ink Spaghetti with Pepperoni and Peas has got to rank up there with my favourite mid-week super quick dinners.

I like to sprinkle with fresh chives before serving.

That color is stunning! This dish looks and sounds so unique and delicious, I'd try this in a heartbeat!

Thanks Erren, I do love the drama squid ink pasta adds to a dish, plays so well with the reds and greens, tastes mighty fine too!

Really? You must give it a try it is really tasty.

This dish looks very elegant and adult, if that makes sense! ?

Ooooo does that qualify me as an adult :D Yay me, my Mum always said I would grow up one day ;)

The squid ink is such a crazy colour, but it adds that amazing quality to the simple food. I love simple meals, particularly when I've had a busy day, so I'm all for three ingredient recipes.

Totally with you, adds just a splash of 'bling' to what is a really simple quick and achievable meal any day of the week.

This looks delicious. I love squid ink pasta but rarely buy it as it's usually only found in speciality stores. Love the colour contrasts of the ingredients. yummy.

It seems to have gained quite some traction here in Hungary with many of the larger stores carrying at least one brand, even out here in the countryside :o