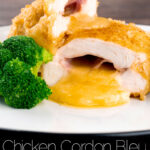 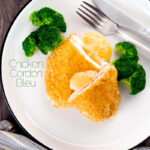 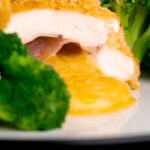 Chicken Cordon Bleu is a retro classic, ham and cheese stuffed chicken breast is meant to be indulgent so how’s about we cook it in butter?

This dish may have been banished from pretty much every menu in the UK for being too “cheesy”, see what I did there?

However, here in Hungary, gourmet chicken cordon bleu commands a place in the hearts of millions. Although here it often goes by the slightly longer name of sajttal sonkával töltött rántott csirkemell. This is why I cry when learning my adopted language!

A take on this recipe is on pretty much every single restaurant menu in Hungary. It is essentially a cheese and ham chicken Kyiv!

My version of this recipe abandons all notions of moderation, this recipe is pure indulgence.

This is meat stuffed with more meat and some cheese, why would you want to try and turn it into a paragon of virtue?

My version of a traditional chicken cordon bleu cooked in butter, lots and lots of butter!

It is a method that I shamelessly stole from a British chef and butter fiend James Martin. The person who also inspired my pork tenderloin with prunes recipe.

You could also cook in good quality lard in the same way that I do with my Wiener Schnitzel recipe.

If you want a baked crispy chicken recipe then I can recommend my Cornflake chicken. Yes, you read that right!

But what cheese and what ham.

First of all, you do not want an overly salty cheese! Aim for something a little nutty and sweet with good melting properties.

For me that means a Swiss cheese, Gruyere would be great although I opted for a nice Swiss raclette.

Although I have on occasions used French Comte cheese in my chicken cordon bleu and that works really well!

Then the ham, this is the reason why we do not want to go for a salty cheese. I often see people recommending prosciutto but for me, that does not have enough body.

You want a well-cured quality ham that is sliced 1-2mm thick.

Chicken cordon bleu is often served with a sauce, which I personally find curious and it is not for me.

I’m quite happy with some steamed broccoli, which is what I have served this version with.

Although when it is in season, I always serve cordon bleu chicken with some simply buttered asparagus.

It would also work exceptionally well with green beans amandine or some honey roast carrots.

Chicken cordon bleu, a classic and simple chicken breast stuffed with salty cured ham and raclette cheese then cooked until crispy in an obscene amount of butter!

I should be on a diet and I should run away, but I cannot. It looks magnificent and I agree with the Swiss cheese. It is the best for a cordon bleu

But but but, butter is diet friendly isn't it? Thank you :)

This recipe would be such a treat!! I have not made a Cordon Bleu for absolute ages. Maybe time for one now. It’s a super delicious dish and yours looks amazing Brian. ??

Yum. Chicken Cordon Bleu is such a treat for us. I make it every few months or so! I love using chicken thighs with mine, but since yours looks so delicious, I'm going to try your recipe, exactly as is! Melty cheese dripping out of chicken is the best, isn't it? This looks so fantastic Brian!

Thanks Elaine... It is the mountain of butter that does it for me in this dish... But I am most definitely a butter makes everything better kinda guy ;)

Marisa Franca @ All Our Way

Hey, Krumpli you're getting mighty fancy. I'll have to get out the table linens and crystal for this dish. The only problem is I don't have crystal but I do have some dish clothes and sheets that would work as table linens.

Hehe, the name may be fancy but it aint nothing but cheese, ham and chicken, no needs to get all fancy on my behalf ;)

Such a classic! And for good reaaon: it's so delicious. I've had it several times, even though it's not easy to find. But I've never made it. Thanks for the suggestion!

Cheers Jeff, my wife loves stuff like this so have to keep in her good books and make it occasionally, old 'skool' classics are that for a reason, because the are awesome :)