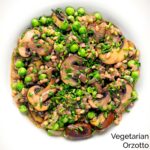 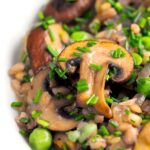 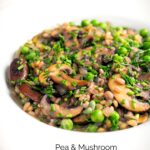 This vegetarian mushroom orzotto is essentially a pearl barley risotto and it features loads of sweet garden peas and red wine.

So stick with me on this! The Italian word for barley is Orzo, yes just like the pasta I used in this orzo salad. The pasta gets its names from its shape being similar to grains of barley.

In the north of eastern Italy, they make a risotto from pearl barley.

And that risotto is called, you guessed it Orzotto!

There has been a trend of using orzo pasta to make a risotto type dish using this name.

It probably comes from a misunderstanding and it is pretty tasty, but it ain’t what it claims to be.

This mushroom orzotto recipe is really classic in both its flavour and technique.

The barley itself has a wonderfully earthy flavour that I love and a really great almost chewy texture.

Pearl barley or pearled barley is barley grain that has had its outer husk removed.

It has been used as a food source around the world for hundreds of years and it features in both my rabbit stew and my cockaleekie soup.

It is also one of the key ingredients in a classic Jewish Cholent.

“Pearling” barley differs from country to country and to be honest from producer to producer.

So the first time that you cook this recipe, it is important to be prepared to be flexible on the amount of stock you use.

Do not worry, you have not done anything wrong.

Just taste and test for the last 5 minutes, if you need more stock then add it and give it a little longer.

How to Cook Pearl Barley Risotto.

There are loads of risotto recipes here on Krumpli everything from tomato risotto to prawn risotto.

A good risotto needs stirring, it is not a difficult task but a time consuming one.

I maintain that you can taste the love and patience that has been put into a risotto.

A “risotto” made with pearl barley does not need that kind of attention, we add the stock a little at a time and keep it moving.

But in reality, stirring it a few times after every addition of stock is fine. And the stock can be added in much larger quantities than in risotto.

Once the barley has the tiniest of bites and is just past chewy it is done.

After that, I use the same technique I use to finish all of most of my risotto recipes.

Add some butter and maybe cheese and allow it to rest for 3-4 minutes.

The resting is just as important as to cooking so do not skip this step!

An Orzotto is a North Italian recipe that is essentially a pearl barley risotto, this is a mushroom orzotto that gets a deep flavour from the use of red wine!

I like to serve this with lots of snipped chives.