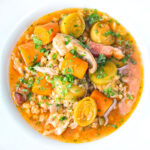 Rabbit stew is as old school as it gets this one is delightfully frugal, packed with flavour and features the much-underused pearl barley.

I’m kicking off my slow transition to autumnal food with a delicious and simple stew recipe. Yes, I’m being all populist again with my fancy old-fashioned ingredients and traditional cooking methods.

This recipe is not my first rabbit recipe here on Krumpli. It joins a rabbit tagine, rabbit cacciatore, and a rabbit ragu.

This recipe, however, is a little closer to home and is very British indeed.

It is the sort of thing that would make my gran smile a great deal!

Rabbit was one of the sources of protein that was not rationed during WWII in the UK and during the rationing period after. As a result, it became understandably a popular ingredient.

I genuinely love the stuff, it has a wonderfully subtle flavour that is nothing at all like chicken! So forget everything that you have ever read.

It is exceptionally lean and has a tendency to dry out when cooked quickly.

Consequently, this slow simmer approach of the bony leg cut is the perfect foolproof introduction to cooking rabbit.

You could swap this out for other rabbit pieces, but be careful of the loin which is notorious for drying out.

What is Pearl Barley?

Wait for it folks, pearl barley is… Wait for it… Barley! Ok, it is barley that has the inedible husk removed and then polished to remove the bran.

It is a pretty ancient ingredient often associated with ‘padding’ out frugal dishes. I personally love the flavour, it is kinda nutty and has the most wonderful chewy texture.

I use it in this rabbit stew in a similar way to the way I use it in my cockaleekie soup. Yes, you read that name right, and yes you have to click the linky thing to find out more!

In some ways it is there to provide bulk, but in the main, it is there for texture and flavour.

This recipe is a slowly simmered stew, which means the vegetables in it go pretty soft… You could add in the vegetables later but then you would lose the wonderful depth of flavour you get from them.

They enhance the stock and that flavour gets all sucked up by the barley. The pearl barley then takes centre stage for texture in this dish preventing everything being a little ‘soft’.

Pearl Barley is also the base ingredient of Orzotto, a north Italian sibling dish of risotto. Most importantly a dish I really must share with you this winter!

This recipe really is a hearty one pot meal with nothing else needed.

That does not stop me from pairing it with a nice crunchy bread though.

My personal favourite is a nice simple soda bread, it is tasty, quick to make and does not need any prooving.

This recipe is a rarity here and serves 4-6 rather than my normal 2.

I will store in the fridge for up to 3 days in an airtight container. It should be reheated over a medium heat with a lid on until piping hot.

Alternatively it will freeze for up to 3 months.

Rabbit stew may seem old fashioned and a little staid, but it is the most wonderful hearty meal. This one is bulked out with pearl barley and despite being filling remains wonderfully light.

Made this tonight and really enjoyed my bowl. Made a soda bread to go with it in a pinch and that really completed the meal. Thanks for your recipe.

So glad that you enjoyed it.

Hi Brian,just seen this recepi on Pinterest and I have a little question for you,I got given a pheasant from a farm in Wales and I have never cooked or tasted pheasant so i was wondering if I could use this recepi for it instead of a rabbit if I cut it into portions (don't even know how to do that :)) thanks in advance if you know the answer to this random question.

@Brian Jones, Wow, thank you for replying so quickly and it was ever so helpful, guess I would maybe have to double the recepi as it´s whole bird instead of two rabbit legs. The video was extremely helpful too. I have to admit I´m really nervous about cooking this, I thought about just throwing it away but felt bad for the old guy who brought it from Wales to Manchester and I would hate the thought of the bird dying for no reason too :) Next on my list are some of your curries, being born in Iceland I had never tasted a Indian food before I moved to England and wasn´t keen, now I´m completely converted and could have it for breakfast (I actually have done that a few times after a few drinks the night before, don´t judge me) Thanks for your help and have a good weekend :) Rakel.

Hi Rakel... Pheasant can be a funny old bird but braising it is definitely the best way to deal with a wild one so yes you could use this recipe. The timing you may need to alter a little, 45-60 minutes may be enough, all you can do is start it off and be prepared for anywhere between 45 minutes and 75 minutes, you can remove the pheasant from the broth to prevent to slow the cooking and reheat later to serve. You can even drop the breast in later as it can have a tendency to dry out, 25 minutes should be plenty for the breast meat.

A meat thermometer really is your friend, the breast is best cooked to around 65C whereas the leg is best up at 80-85C.

I'd leave it on the bone rather than shred it after and in terms of breaking it down it is very similar to a chicken, I have a video on my FB page https://business.facebook.com/watch/?v=3500318419999045 the only thing I would do differently is leave the breast on the bone, by cutting through the ribs with some poultry shears.

I hope that helps a little, have fun :) Brian

I've never had rabbit, but I have to admit this looks amazing! I'll have to give this a try soon!

Great information on rabbit and pearl barley which I'm neither super familiar with. Thanks for the tips and great recipe.

This is a delicious and hearty stew for fall! The bacon adds a fantastic flavor along with the pearl barley.