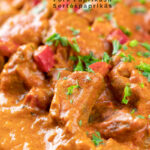 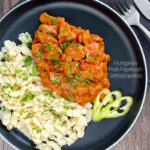 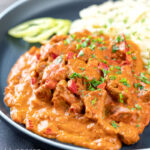 My Pork Paprikash is a delicious take on a Hungarian Sertéspaprikás, a simple dish featuring juicy pork in a silky, paprika rich sauce.

I may be British but I have been living in rural Hungary since 2008 so I know a thing or two about paprikash!

It really is the simplest and loveliest of Hungarian dishes. This Hungarian pork paprikash recipe joins my harcsapaprikás (catfish) recipe and a classic chicken paprikash.

It also shares the paprikash name with my krumpli paprikas. Which is is a potato stew that foregoes the addition of sour cream.

Many advocates of food authenticity would like you to believe that there is a ground zero recipe. A recipe that all others follow!

That is simply not the case in most cuisines. Paprikás, if you like, is a spectrum of recipes.

Paprikash is typified by its paprika heavy sauce which is often made silky with sour cream or tejföl as itis called here.

That sauce is often thickened to a lesser or greater extent by mixing flour into the sour cream.

Pork is a relative rarity in paprikash recipes in Hungary. You are much more likely to find it at home than on restaurant menus.

However, it is not without precedent. In fact, this paprika pork recipe features more than a passing resemblance to a classic Hungarian pork stew called borsos tokany.

That dish goes heavy with black pepper, where as this dish features the unmistakeable influence of sweet Hungarian paprika.

An ingredient that it is difficult to believe is a relative newbie to a cuisine that dates back over a millennia.

The most important ingredient in a Paprikash is the paprika, the name kinda gives it away.

You should use the best sweet (Édes) Hungarian paprika you can find.

If you are buying it online look for words like 1 Osztály (1st class).

Names like Szeged or Kalocsa are decent indications of good quality, they are both cities in the South of Hungary famed for paprika production.

You can get spicy Hungarian Paprika, which I occasionally use to add a bit of heat to my paprikash recipes. Go ahead and just add more, you can rarely add to much paprika to a paprikash.

One final word on paprika, do not use smoked paprika if you want a Hungarian paprikash.

It does not really exist here and it creates a dish that is very far removed from the essence of paprikash.

As for the pork I always use a cut called tarja in Hungarian.

It is known as Boston butt in the US, blade collar, or even hand in the UK.

You can substitute for shoulder or even get fancy and use pork tenderloin if you get creative with timing.

You can use lower-fat sour cream in this recipe as the flour helps to stabilise it, but it still has a greater chance of splitting than full fat (20%) sour cream.

Paprikash here in Hungary is more often than not served with nokedli.

A glorious pasta style dumpling that I simply adore and a dish that I think deserves to be much more well known.

Or you could serve it with csusza teszta, a dish that features alongside my catfish paprikash recipe.

It is also served alongside salty potatoes which I like to enrich with butter. Butter is often the answer to many kitchen questions as far as I am concerned.

Although I often serve it alongside crispy fried potatoes, I always serve those with my pork stroganoff. Another dish that is fairly similar to this one.

A Hungarian paprikash is a simple and delicious dish, this pork paprikas or sertéspaprikás cooks in a shade over 30 minutes and it will become a midweek family favourite.