This rocket pesto pizza is very much a change form the norm, it is gloriously savoury and indulgent with a thick and voluminous crust!

This is my third pizza on my website, the first was is a classic Margherita Pizza, the second a less than classic BBQ chicken grilled pizza.

Like the second this pizza is not so classic, featuring a pesto base and topped with goats cheese and bacon. Again like the second I also favour cooking this on a BBQ.

Even the pesto is a little “outside the box” too a rocket pesto rather than basil pesto. You could even use the wild garlic pesto in this pasta recipe.

Unlike both of my former pizzas this is a thick crust pizza.

You will note that there is no added salt in the toppings for this recipe.

Avoid adding any, we have plenty of salt between the parmesan cheese, bacon and goats cheese.

What’s The Difference Between Thick and Thin Crust?

Absolutely nothing other than the thickness of the crust.

However, that is not where the story ends. Typically pizza dough is allowed to rise then it is punched back.

Then it is formed into balls and then allowed to sit for a short while, this prevents the pizza form shrinking back when flattened.

This rocket pesto pizza has an additional proving after it has been flattened. It is only another 15 minutes or so but that is the secret to the fluffy crust you can see.

That and of course being cooked on a fierce heat.

Cooking on a BBQ.

I love cooking fakeaway recipes on my grill, everything from my venison burger to my BBQ Tandoori Chicken are favourites.

However, Pizza is the real revelation, my guide to grilled pizza will tell you why in more detail.

But in short it is the searing heat, most domestic ovens will top out at 25o°C or 480°F.

With a good run, I can get my BBQ up to 350°C or 650°F, this means it behaves much more like a pizza oven or even tandoori oven!

For the Pizza Dough

To Cook on a BBQ:

To Cook in an Oven:

Feel free to use any pizza dough recipe that you like, mine is an over night dough for flavour. 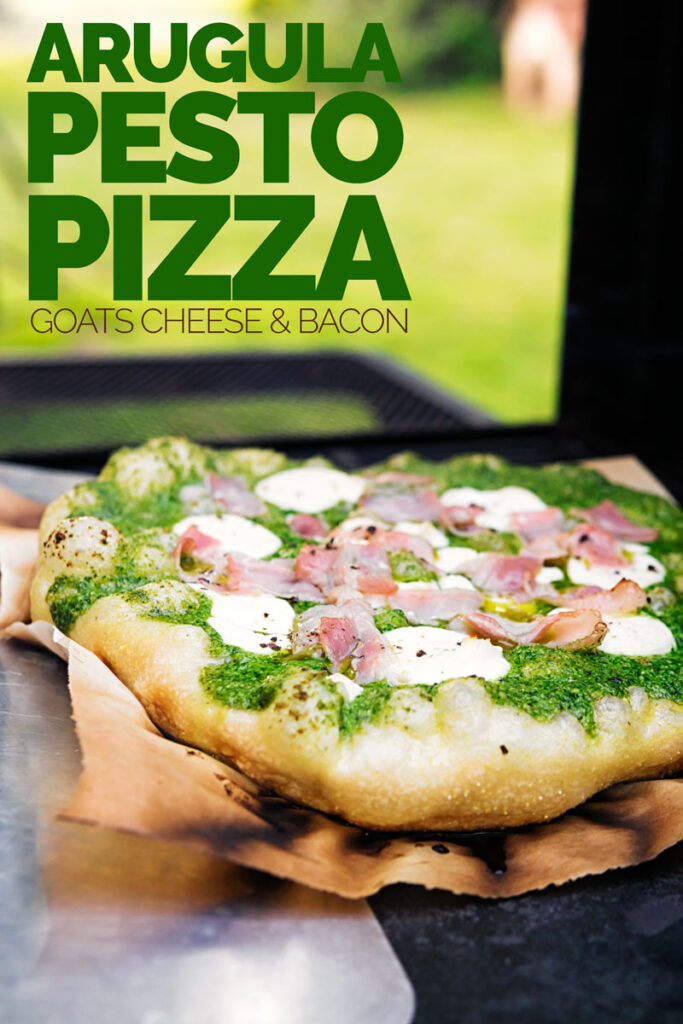 6 thoughts on this Recipe: