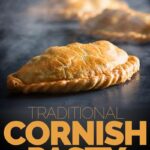 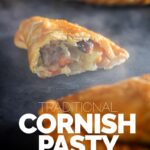 The traditional Cornish Pasty dates back to the 13th century and is a pie that squeezes a great deal from pastry, beef, swede and potatoes!

Whether you serve them for dinner or stick them in your lunchbox, these treats are the ultimate British pie!

Cornish Pasties dates back to the 13th century and unsurprisingly is the source of much discussion. When I say discussion I mean argument!

However to call this dish famous in the UK would be an understatement. Any foodstuff name-checked in classics like the Robin Hood Chronicles, the Canterbury Tales and no less than three works of Shakespeare is no shrinking violet.

In short, the humble Cornish pasty is nothing more than a ‘hand pie’ as I see them called on the web. The filling is with four very good things and some salt and pepper.

Those four things are Potato, Onion, Swede (rutabaga elsewhere) and finally beef. It is then seasoned and wrapped in a pastry.

The Pastry For Pasties…

I have a few pies here on Krumpli. I usually advocate store-bought bought puff pastry for both my beef and ale pie and my chicken and mushroom pie.

Without reservation, I recommend making your own pastry for a Cornish pasty.

A shortcrust pastry is a perfect pastry for a traditional Cornish Pasty. Mixing half butter and lard as the fat content really maximises this function. It is simple and all you have to do is work cold and use a food processor.

The most important aspect of the pastry is to lock in both the ingredients but also the steam and juices. That is the key to the flavour!

Afterwards, it is baked in a slow oven to allow the flavours and juices to play. They are delicious straight from the oven but even better at room temperature if you ask me.

Traditionally food of Cornish ‘miners’, if rumour is to be believed. The crimped crust serves as a hand hold and was discarded, because, well mucky hands of course.

By all means feel free to do this but I would advise you to have your head checked. The crust is the best bit!

It is hard to believe how much flavour you can get from so few ingredients but believe it you should!

A traditional Cornish Pasty is what Americans know as a hand pie, filled with very simple ingredients it is hard to believe just how much flavour these beef pies have!

I very much enjoyed making and eating these, though I must confess I made them with a turnip and venison as I had neither beef nor rutabaga.

I assume these pasties freeze well, but I would appreciate knowing whether to thaw them before reheating, or put them into the oven frozen.

I made the slow cooked rabbit legs with Indian flavors last week which was also a lovely meal. The success of both recipes makes me plan to prepare a different recipe from the website each week.

Hi Gina... Sorry it took a while to respond, I have been in the process of relocating.

I'm so glad that you found my site and that you are having such success, I'm loving the idea of a venison pasty so much that I will forgive the turnip lol :D

Yes, you can freeze a pasty although they are much better frozen uncooked, I cook from frozen in a moderate (170°C-180°C or around 340-350°F) oven until piping hot in the middle and nicely coloured up. You can defrost for slightly better results, but do not defrost all of the way, I find cooking them when they are slightly firmer gives more pleasing results.

I was born in Cornwall over 70 years ago and it was the first thing you learned to cook . we used Skirt beef, potatoes, onions and swede salt, pepper and a few drops of water for the gravy. And the twist was always down the middle with your initial and hoped yours did not burst and loose it’s gravy.

No splitting here, it took years to get my crimping technique right but now it is as tight as a tight thing :)

My mother was born and raised in Cornwall. She came to Canada as a war bride and brought with her a great talent for making Cornish pasties. My favourite was potato, onion and egg. The egg was beaten with a fork and poured over the potato and onion. Salt and pepper added. I now believe this version happened when she was short of grocery money. For my sister and I, it's such a wonderful memory and not one of being short of anything. I just may bake today!

That sounds superb, I'd be completely down with that as a munch, add some baked beans on the side and I'd be in nostalgia heaven! One of my favourites is cheese and onion with lots of mustard :D

Where does the trans fat come from in this recipe?

@E.N.L, most likely from the lard and sirloin steak.

I have no idea I am afraid I use a third-party application to provide nutritional data and it is to be used as a guide only.

When I was 10,11 and 12 I lived in Adelaide,Australia. On the playground there was a covered stand that was open around noon and they sold cornish pastry pies.Wonderful memories. They had a certain spice that I couldn't discern,and they wouldn't tell me what it was.I think someone else must have made them and this person just sold them.What memories !!!!!

Traditionally the only spice used is black pepper and there was always loads of it. But I have had them with all sorts in and almost always love them. Food memories are always so powerful and make me smile!