My version of Bucatini All Amatriciana the classic simple pasta recipe from the Lazio region of Italy and is gloriously simple.

Bucatini All Amatriciana is a classic pasta dish from the Lazio region of Italy and it is seriously tasty… Hard to believe you can pack so many flavours with so few ingredients into a dish in just 20 minutes!

In fact, I would go as far as saying it is THE classic pasta with tomato sauce recipe from Italy.  Although a Putanesca sauce would give it a good run for its money!

I have taken the liberty of shifting things around in this dish to represent what I can buy locally.

Of course, I would love to use guanciale, which is a salt-cured pork jowl.

But let’s face it for most of us it is just not available, so a nice streaky bacon works well for me.

I often take liberties with many of my recipes, after all, I am a cook and recipe developer. Reading a recipe, then cooking it and writing it down really is not what I do.

However much like my penne arrabiata recipe, this Bucatini All Amatriciana recipe stays pretty close to a traditional recipe.

The Amatriciana sauce consists of tomatoes, cured pork and pecorino cheese. You can, of course, swap this out for parmesan if you wish. Then it gets a punch with a little chili and black pepper.

Pecorino is a slightly sharper more acidic cheese which works well with the tomatoes. Parmesan is a little more fruity and peppery.

Ewes milk, like goat milk, is sharper and more acidic which adds that flavour to the cheese.

For me, the pecorino offers a sharp counterpoint to the sweet tomatoes. In much the same way, I use goats cheese in both these stuffed pasta shells and this pea spaghetti recipe.

As a cook, I firmly believe that we should be cooking with the ingredients we have close to home.

I firmly reject the notion that we should be ordering speciality ingredients from the internet. There is a growing trend to think that we should for instance order the guanciale I mentioned earlier in order to cook Bucatini All Amatriciana.

As far as I am concerned that is utter nonsense. It is used in this dish because it is a local product to where the dish originates.

If you are cooking this dish outside of that region it makes perfect sense to use a product that is local to you.

Particularly given the fact many western societies have such great regionalised cured pork products. 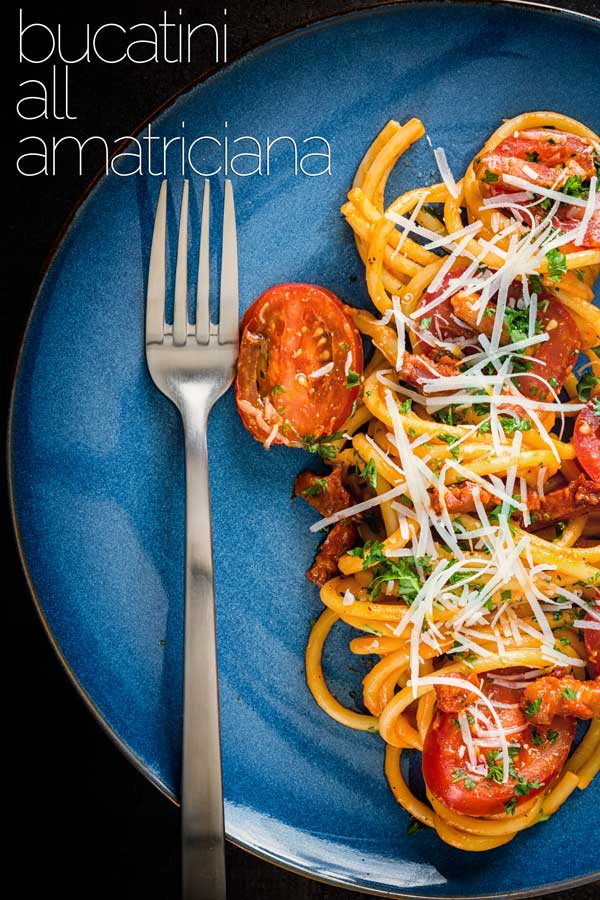