A glorious homemade coiled Cumberland Sausage is the star of and mash recipe that also has a onion gravy!

What Is Cumberland Sausage?

You will be surprised to hear that it is a sausage from the British county of Cumbria!

Us Brits are rather fond of a good sausage. One of the first things I taught myself to make when we moved to Hungary was a good British Homemade sausage.

This sausage recipe is an extension and refinement of that.

Traditionally this sausage is unlinked and sold by length or as in this recipe sold and cooked coiled.

Flavourwise this sausage should be spicy! Despite a slanderous reputation for bland food we Brits are fond of spice and have been for a very long time.

Cumberland sausages date back 500 years and as far back as the 18th Century they have been synonymous with spice.

How To Make Sausages At Home.

Sausages have a bad reputation for containing all sorts of crap and when it comes to cheaper sausages it is a well-deserved rep.

But the process of making sausages is simple as you can see from my video.

The greatest plus point of making your own sausages is knowing what is in them.

It is not a case of making them ‘lean’ as all sausages need a reasonable fat content.

But instead, it is a matter of making sure that you are not eating the crap that your ‘supermarket’ or butcher cannot get rid of any other way!

I am no advocate of kitchen gadgets and comparatively speaking my kitchen is sparse on that front. But a meat grinder is an absolute must-have tool as far as I am concerned.

Of course another great positive of making your own sausages at home are the giggles!

Seriously if you are not making childish and puerile jokes as you go then you are a better person than me.

How To Prepare Sausage Skins.

The most important part of this is to buy the right sausage skins.

After that, it is a simple case of rinsing the salt off them. Then soaking in room temperature water for 45 minutes to an hour.

You can do this whilst you prepare your ingredients and grind your pork.

Then give them another rinse and transfer to some fresh water whilst you thread onto the sausage stuffing nozzle.

If the skins feel a little rigid increase the temperature of the soaking water a little. It will help soften it up a little but do not go too hot!

There is no discussion to be had on this!

The most quintessentially British way to serve sausage is as part of Bangers and Mash.

That is sausages and mashed potato, this must be accompanied by onion gravy. Failure to do so will result in incarceration in the Tower of London.

I will not rehash my thoughts, other than to reiterate, butter/cream at varying amounts depending on texture required. Everything else is over-egging the pudding.

The last, but far from the least, thing to mention is the onion gravy.

Mine is very similar to the gravy I use in my faggots and mash recipe.

But I switch from tomato puree in that recipe to mustard in this recipe to keep the spice theme running.

You can increase/decrease the amount of flour in this recipe to change the thickness of your gravy.

They freeze wonderfully and can also be broken down into single link sausages although a traditional Cumberland sausage is sold by length rather than in links.

The calorific value of this recipe refers to a single portion of the sausage, mash and onion gravy meal and not the extra sausages we get to freeze up! 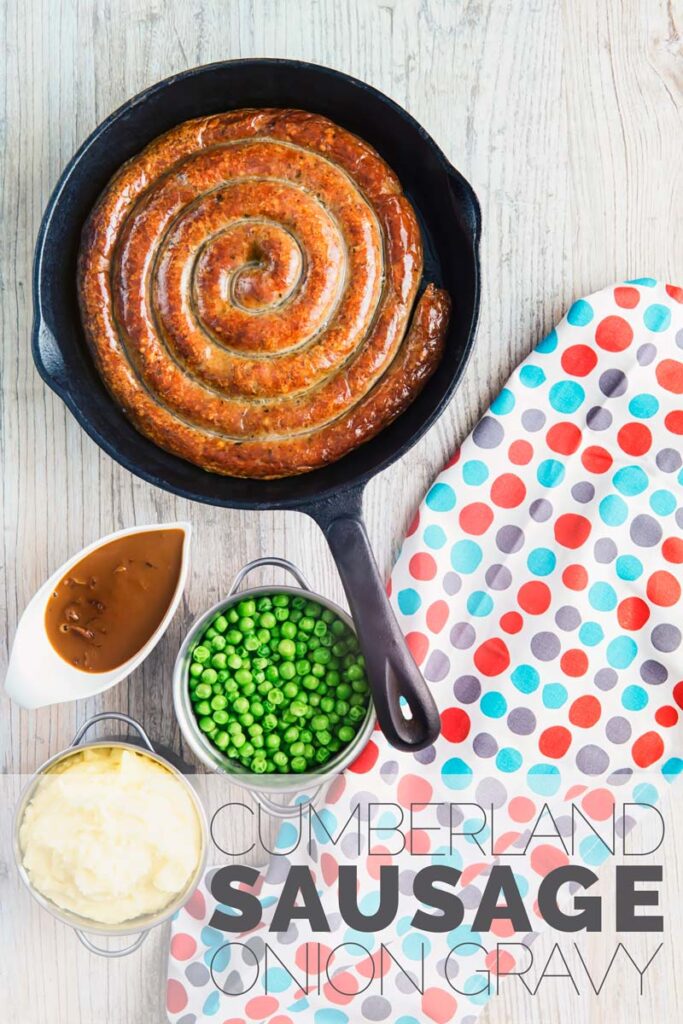 21 thoughts on this Recipe: