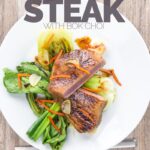 This glorious honey and soy glazed tuna steak is pimped up with a bit of chilli and seared rather than cooked, it is served with garlic braised pak choi and spring onions.

Oooo look what I found… Tuna is a really rare and really rather expensive find here in Eastern Hungary.

But I just could not resist buying it and revisiting an idea I used to cook once a week back in the UK. In fact, I bought enough for at least a couple of tuna steak recipes here on krumpli!

Of course, life in the UK for me is a dim and distant memory. I’ve been here for over 10 years but somethings stay very vivid in your mind.

In all fairness, this is a very simple recipe, honey soy and mirin mixed with a little oil and chilli to form a glaze.

Then sear hot and fast, rest and serve! To be honest with you tuna steak is the easiest thing to cook, and look at how purdy it is.

Is It Pak Choi, Bok Choi or even Bok Choy?

I have genuinely no idea what this stuff should be called. I’ve even heard it referred to as Chinese Cabbage, let’s face it, it ain’t like any cabbage I know!

In this recipe, I have called it pak choi, in my duck donburi recipe, bok choi. I guess I need a third to get the other derivation on my site to add maximum confusion!

As far as I am aware it makes no difference, they are the same thing. Its latin name Brassica campestris L and it is of the brassica family.

I genuinely love this stuff though! It is so easy to cook and has the most amazing texture.

Here I have simply seared off some pak choi that I have chopped in half. Then added some stock and a lid and allowed to quickly braise.

It is the perfect side dish to this seared tuna recipe.

How Rare Do You Cook Tuna?

The simple answer to this question is, it is up to you! As you can see I am rather fond of having my Seared Tuna really rather rare.

In fact, if it were of better quality I would have gone even rarer as I have done in this seared Tuna with a Caper Sauce.

However that is my dinner, I am not here to judge the way you want to cook your food. If you like your tuna cooked all the way through then do that!

However, if you do like your tuna steak cooked more than a minute or two each side you need to take a different approach with cooking this recipe.

Cooking this glaze for 5-6 minutes on each side to cook your Tuna steak all the way through will burn it. The sugars will go fully caramalise, go black and it will taste bitter.

The solution is simple, season the tuna first, then cook in a tiny amount of oil, then flip. It will no longer be a seared tuna but perfectly cooked all the way through for those that like it like that.

When you are a couple of minutes away from serving add your glaze. Allow to cook for a further 60 seconds then flip for a final 60 seconds.

Serve and have it just the way you want it!

Fish is such a great 'fast food', this seared fresh tuna steak is glazed with honey and soy sauce and is served with bok choi and is all done and dusted in 25 leisurely minutes!

This tuna is cooked just the way I like it, cook it longer on a lower heat to prevent the honey from burning if you like it cooked more.

I love the flavors here. I get fresh tuna from the local market here every Saturday for a very reasonable price, so I will totally need to give this a try!

O God! What a great recipe! I want to try it immediately! Looks very tasty! yessss! This is the perfect recipe for me. Love the unique flavors in this recipe! Now, this recipe will be one of my favorites. Looks incredible! YUM!

Honey and soy are such a delicious combination and this has just reminded me that I haven't cooked fresh tuna in ages.

This is just my kind of summer meal! I make tuna steaks weekly, but never tried with pak choi, will surely tried this soon!

YUM! I love tuna! Looks so delicious and perfect for a healthy dinner!

Thanks Natalie, healthy is always an accident tasty is on prurpose ;)