My honey roast pork loin is joined by a a chorizo studded bean and roasted red pepper side for a fab Spanish influenced meal!

I am loving having more time to spend in the kitchen and this Honey Roast Pork Loin with Chorizo and Red Pepper recipe is a celebration for that. Cooking for me is a passion and have been writing a lot of really quick recipes of recent and the slow recipes I have been making have only been slow in the sense of cooking, preparation has been typically quick.

Here I am returning to my first love here, standing in the kitchen listening to loud music with lots of profanity, a spoon for tasting, glass or two of something red and some glorious ingredients.

Cooking for me is a pleasure I never resent spending time at the stove, I love it and hopefully this honey roast pork loin reflects that.

Whilst I was walking around one of our local stores I noticed some Chorizo, I rarely by food from big supermarkets and typically go to small local producers but could not resist buying some as I remembered a dish that we loved eating last summer using lots of paprika rich Hungarian Kolbasz. Consequently here it is and the move to Chorizo works wonderfully.

Honey roast pork is, let’s face, pure food filth in the very best way possible. This is very definitely a Spanish influenced dish and certainly adds to the globe trotting I have been doing of late, whilst of course not leaving my kitchen.

My last 6 recipes (not counting this one) have, in reverse order, their influences in Italy, the USA, Hungary, India, France and the Middle East, never let it be said I am a little Englander!

Bizarrely enough the one food I cook less than all other is British food, supposedly the food I was bought up with, I have no idea, why. I guess in many ways I don’t really find it that exciting and in the main it lends itself much more to Autumn and Winter dishes to me. Having said that I do have a few in mind heading your way including a rather lovely stew and hopefully a couple of pies if I can improve my pastry making abilities.

Autumn has certainly hit here in our corner of Hungary and it seems to have done it in two very distinct ways, when Julies Mum arrived for her visit in the middle of September we still had temperatures of 30°C, which in her second week dropped, pretty much overnight to early 20’s.

Well yesterday we had another of those drops and we are now sitting at just 14°C. It always seems to happen this way, my wifes Birthday is next weekend and whilst I have a fabulously indulgent treat planned for her (an my by proxy) it would have been nice to have some warmer weather.

For the Red Pepper and Chorizo

For the Honey Roast Pork Loin

I usually make this dish with a dried Hungarian Chorizo style sausage so don't worry about getting creative with your choice of paprika based sausage. 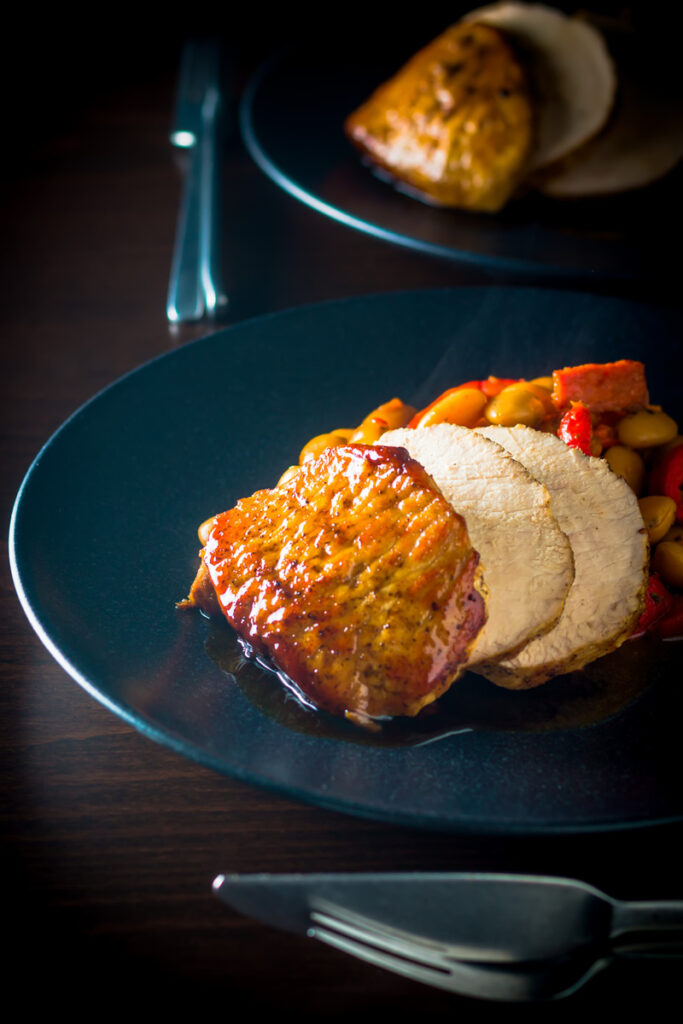 18 thoughts on this Recipe: