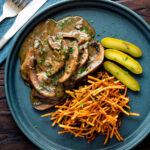 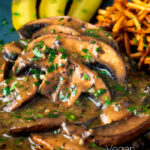 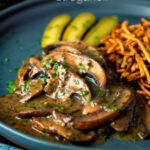 Vegan mushroom stroganoff made with large field or portabello mushrooms in a roux based sauce with mustard and a surprise ingredient!

That surprise ingredient is marmite, a malted yeast spread that adds a great umami edge to the dish, and best of all it is all done in under 30 minutes.

Like many recipes, the classic stroganoff is almost unrecognisable today from its original recipe.

Originally it was a dish that featured cubes of beef in a mustard sauce made with a roux and just the tiniest bite of sour cream.

Now I’m a pluralist when it comes to food, the idea that there is a “best” anything is anathema to me.

My vegan mushroom stroganoff leans back on the roots of this dish and uses a mustard and roux sauce.

I use vegan butter to make the roux, a product that has improved greatly over the years. But you can use regular butter and make this a veggie mushroom stroganoff if you like.

The addition of marmite may be controversial.

But it is a flavour enhancer rather than a flavour that dominates. I dislike the stuff spread on toast but add it to something like the veggie gravy that I serve with my vegetable toad in the hole and it is pure magic!

Marmite is a yeast extract spread from the UK that has a love it or hate it reputation. I’m kinda in the middle, when it comes to eating it neat then it is not for me.

But added to sauces and gravies it adds a wonderful umami flavour that is particularly good with vegan and vegetarian dishes.

Is there an alternative to marmite?

Hardcore fans of marmite will say no, however, Vegemite will do a very similar job in this recipe.

Do I have to use portabello mushrooms?

No, you can use any mushrooms that you like. But portabello mushrooms always seem to have a “meatier” texture and are the mushroom of choice for me in dishes like this and devilled mushrooms on toast.

If you use button mushrooms, your sauce will be much paler in colour and have less “shroomy” flavour.

Can I use other types of mustard?

Yes, it will change the flavour but play around with your favourite types of mustard, they will all work well. Dijon is just my favourite for this vegan mushroom stroganoff recipe.

As far as I am concerned the perfect accompaniment to this vegan mushroom stroganoff is fried potatoes, I serve it here with straw potatoes!

They are also a pretty traditional accompaniment to a stroganoff.

However there are other options, my recent mushroom ragu recipe was served with a cheesy polenta.

Now I would not suggest a cheesy polenta but a polenta base would work very nicely with this recipe. As would something like polenta chips.

Both rice and pasta are popular sides for stroganoff recipes. I would personally favour a nice nutty whole grain rice, but buttered noodles make a good addition too.

This easy and quick vegan mushroom stroganoff is a delicious take on a classic recipe, it returns to its traditional roots by featuring a roux based sauce rather than a sour cream sauce.

We made this and it was delicious. It went down well with everyone. The only change I made was using onions instead of shallots and used a little extra cream so it was saucier. We'll definitely be making this again very soon :)

Glad you enjoyed it Melissa :)

Yum! I love everything about this. How comforting and healthy!

LOL @ the shout out for your adopted country!

We eat lots of mushrooms and this recipe looks like a great way to serve them up. Will be giving this one a try soon!

Thanks Noel, seriously you do not understand how proud the Hungarians are about their paprika ;)

Another beautiful mushroom dish by you! I will be thinking of you when I want mushroom recipe inspiration...they're all gorgeous, and this one is no exception. Thanks for another great one!

Thanks Traci, you are far too kind :)

You know, I love a good stroganof, but have never made one with mushrooms only! I think next week is the week - plus my son was practically begging me to buy mushrooms at the store today, LOL. (He's two, so I don't think it has anything to do with actually wanting to eat them, but that's OK.) So it's clearly fated!

The stars are aligning, your nipper clearly has good taste! Enjoy! :D