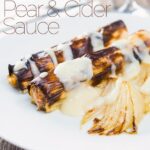 These leeks are wrapped around a mixture of pork, pine nuts, fennel, and thyme and matched up with a fantastic pear and cider sauce!

The idea behind this recipe came from a Hungarian magazine I was flipping through.

I love leeks, they are the mildest of the onion family and never really thought of using them as a way to hold together a stuffing before.

So I set out playing with some ideas that are fitting for the unseasonably mild weather we are currently experiencing. This is perfect, in many ways it tastes like a leek and fennel sausage, but without the sausage making hassle.

Now I have no problem with making sausages, you can check out my recipe and technique. But this is meant to be a quick meal that tastes great with ingredients that are often lying around.

I have no idea whether these are really leeks stuffed with pork or ground pork wrapped in leeks. I do know they are super simple and really tasty.

Pork always works so well with fruit and this sauce is an homage to that. This is not the first pork with pear recipe here on krumpli.

It is a match made in heaven, I roast sliced pears over pork chops. I roast whole pears with blue cheese and serve it with a pork loin steak. And here we make a pork and cider sauce with plenty of butter to nap over the leeks.

It is a simple sauce with a sweet and sour edge, which is meant as a counterpoint to the very savoury pork stuffing.

It is so simple and will work well with a host of pork dishes and makes a lovely change from a gravy style sauce.

When is Cider not Cider?

In other news, I had a revelation a few weeks ago.

I thought the word cider was pretty much understood to mean alcoholic apple or pear juice.

My mind was suitably confused and have spoken with a number of Americans to try and understand why and I am no further forward. Although most of the web attributes it to prohibition and varying attitudes in the US to alcohol.

But apparently, if you are American the unprocessed juice of an apple is cider, not apple juice.

Just to clear this up, and for the sake of consistency, the unprocessed juice of an orange is called orange juice in the US.

But if you are reading this in the US please make my pear sauce with hard cider.

What To Do With Left Over Leeks.

This recipe only uses the outer few layers of leeks and I hate waste.

But fear not good people of internetland, I love leeks and use them a lot! So with your leftover leeks why not take a look at some of these recipes?

I guess you best be heading off to the kitchen now, enjoy!

These leeks are wrapped around a mixture of pork, pine nuts, fennel, and thyme and matched up with a fantastic pear and cider sauce!

For the Stuffed Leaks:

Do not waste your remaining leek, scroll up a bit and take a look at some other leek based recipe suggestions.

I've never seen or heard about stuffed leeks before -- or using them as a "wrapper." Brilliant and so unique. The flavors you combined in the stuffing sound so delicious. I definitely want to give it a go. And interesting about ciders . . . yes, here in the states, if there's alcohol we it's always card "hard" apple cider. Cheers!

Is it wrong to be a little in love with a recipe you haven't tried yet??? I love leeks, but I have never seen them stuffed before. I am so excited to try this recipe.

Not in the slightest :D Enjoy and have fun.

Amazing!! I've never seen stuffed leeks before. I might try something like this, such a fun idea!

Thanks Becca, it is a fun idea that works really well and is wonderfully versatile.

This recipe is genius! I love leeks and can imagine how good this tastes! Love the sound of your pear and cider sauce too! Going to pin for later!

Thank you Jacqueline, the taste is superb, I hope you enjoy it as much as we do!

This recipe is so unique and full of flavors. Looks delicious and creamy too. Sure to make it for Dinner.