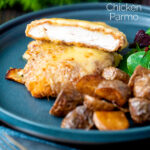 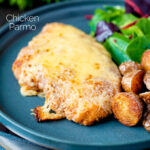 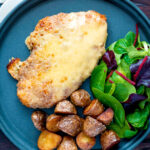 My version combines the cheddar with the bechamel similar to a rarebit and then tops it with parmesan cheese before sliding it under the grill.

There was a point in time when post beer food was a significant part of my weekend eating plans. After a few beers now I am ready for snoozing and not going out for grub!

Growing up in the British Midlands my choice would usually be a chicken pathia or a Doner kebab.

However, if you are from Middlesbrough or Stockton you would be much more likely to grab yourself a chicken parmo.

It begins with breaded chicken, typically deep-fried, but I shallow fry mine in the same way I do in my chicken katsu curry.

It is then topped with bechamel sauce, the same stuff that forms the base of my parsley sauce. Then it is topped with cheese and popped under the grill or broiler.

Despite the name it rarely contains parmesan cheese, cheddar is usually used.

As is my want, I make a few changes to my version, cheddar gets added to the bechamel to form a cheese sauce. I also add Worcestershire sauce, this gives the whole thing a bit of a Welsh Rarebit feel.

Finally, I add parmesan cheese before grilling, because, well because I love the flavour!

Can I bake the chicken?

Yes of course, although given the amount of cheese you will not be saving a great deal!

To bake bread the chicken as per the instructions, then spray with a little oil and bake at 180°C or 350°F for 20-25 minutes. The chicken is done when the internal temperature reaches 73°C or 165°F.

As the chicken will be put under the grill you can remove it 5-7°C below this temperature.

Do I have to use Worcestershire sauce?

Nope, this is not “traditional” in this dish, but it is an addition that I adore. You can add other sauces like Tabasco sauce or Hendersons relish, experiment and make it your own!

Can I make this in advance?

No, not really, but you can do all of the prep work in advance!

Cooking needs to be done just before you are going to eat.

Chicken parmo is an indulgent dish and as far as I am concerned it is in for a penny, in for a pound!

As a result, I love serving this with fried potatoes. They are delicious salty morsels that are perfect with the cheesy chicken.

If you wanted something a little more healthy but still with a potato vibe then air fryer wedges are a great option.

I also add a little salad, but I will make no comment on whether it is only to provide some colour!

Parmo is oftentimes served with a garlic sauce akin to the sort of thing you get with a kebab.

Although my personal preference is for tomato ketchup. Hey, I’m still a child at heart and do not care who knows it!

Post pub food for me "growing up" in Birmingham was a curry, in Middlesborough and parts of Teesside it is the chicken parmo. Fried breaded chicken, bechamel sauce, cheese and it is as delicious and as indulgent as that sounds.

For the Cheese Sauce:

For flavouring the milk (Optional):

Just a heads up you have spelt Teesside incorrectly in your title.

Well isn't that embarrassing... It would seem that I have been spelling Teesside incorrectly my whole life, including on the Birthday and Christmas cards to my Mum who ended up living in Stockton. Thank for the heads up :D

Have just this and I used Worcester sauce it's divine a real treat. Everything we love chicken cheese and lots of sauce with fried baby potatoes. Another great dinner ty.

Thanks Carol, glad you enjoyed it!