The barbecue is a great substitute for a tandoor oven as this whole BBQ tandoori fish demonstrates. A whole trout in glorious Indian Spices cooked to perfection!

Indian food is definitely one of my favourites and I love tandoori, so here is my whole BBQ Tandoori Fish.

Like my BBQ Tandoori Chicken recipe, this tandoori fish recipe uses a BBQ in lieu of a tandoor oven. The great thing about cooking on a BBQ is the extreme temperatures you can reach. A tandoor oven can often reach 500°C, double most conventional ovens.

Whilst a barbecue cannot quite reach those temperatures they do bridge the gap. This is the reason that my BBQ Chicken Pizza cooked on the BBQ works so well.

The fish in this recipe is definitely not just a texture. As a result, the flavours are scaled back, see what I did there, to allow the flavour of the fish to shine through.

Whilst we are on the topic of this fish, this is a tandoori trout. You can use any fish that cooks well whole on the bone. Think, zander, bream or even bass.

What is the difference between Tandoori Fish and Fish Tikka?

In general, the difference between tikka and vindaloo is that tikka tends to be ingredients cut up fairly small and cooked on a skewer in a tandoor. Tandoori recipes, however, tend to use larger pieces of protein cooked on the bone.

So it would be very simple to play around with this tandoori fish recipe and turn it into fish tikka by using boneless fillets. Something like cod. pollock or salmon would work wonderfully.

In fact, you can then take this a step further in the genesis of Indian food. A tikka masala like my duck tikka masala or chicken tikka masala are tikka recipes finished in a masala sauce.

I keep telling you that this cooking malarky is simple.

How To Cook A Whole Fish On The Barbecue.

This is the second whole trout recipe I have here on Krumpli. Like this tandoori fish recipe, the other involves cooking a whole fish on the BBQ.

The process is stupidly simple, really hot coals, brush your fish grill or fish with oil. Then it is a simple matter of cooking over the direct heat of the coals.

Naturally, if your fish has marinaded like this fish tandoori recipe then brush your grill with oil rather than the fish.

I personally prefer cooking my whole fish on the barbeque in a fish cage, they cost pennies really. Whilst they do not offer any better cooking they make flipping the BBQ fish so much easier and less prone to breaking.

You can, of course, use a fish slice to flip your fish, however, make sure it is a long one!

If you are looking for an oven baked fish then take a look at my whole baked sea bass. There is plenty in there that can help you rework this recipe for cooking indoors.

For the Tandoori Marinade:

For the Side Salad:

Cooking times will vary depending on the size of your fish. 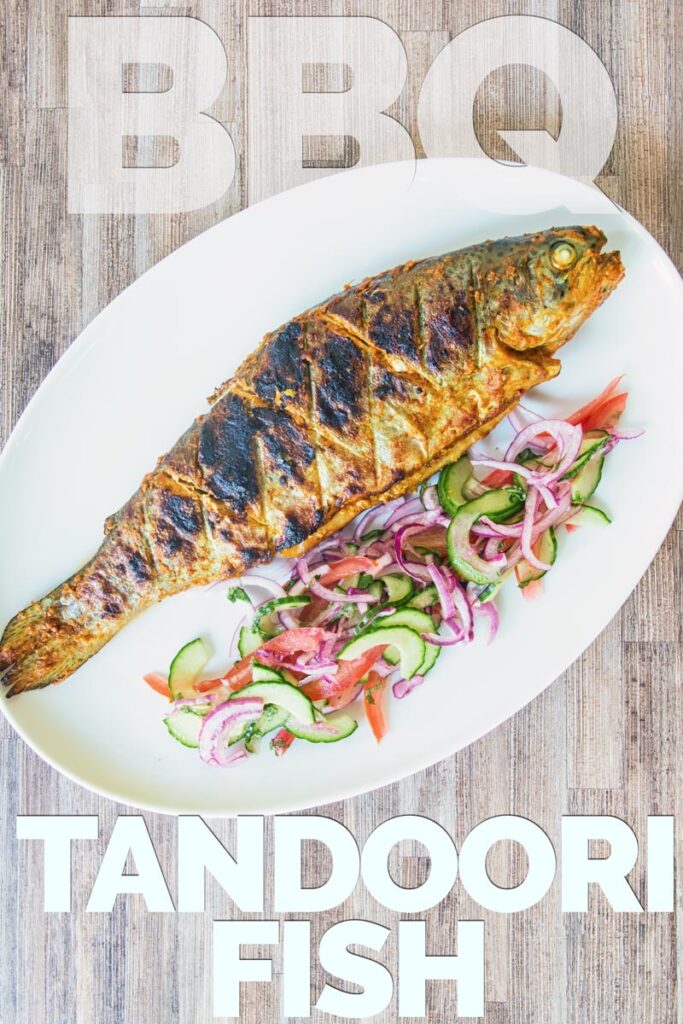 12 thoughts on this Recipe: