A ‘traditional’ Hungarian goulash or Gulyásleves is glorious and simple paprika rich soup.

I have been wondering what recipe to write up as the first on my new blog. Of course, I settled on something from the land I now call home a real Hungarian classic.

I am certainly no stickler for authenticity as I am sure we will establish as time goes on. But this recipe is definitely erring towards both authentic and traditional.

I have however Anglicised this Hungarian Goulash recipe with ingredients that I know should be relatively easy to find in the UK or US.

Just the same as many people, I thought a Goulash was a stew, then I went and moved to Hungary.

I have been here since 2008, eaten dozens of variants of this dish and every one of them has been a soup!

A good gulyás is indeed heady with sweet paprika but other than that it is a simple affair of potatoes, peppers, onions and meat, traditionally beef.

There are of course many variations on this theme, babgulyás is a bean goulash, and even Halászlé a fish soup is very similar to a goulash.

Although Hungarians will and do argue to the contrary!

How Do You Make Traditional Hungarian Goulash?

Traditionally any Hungarian goulash recipe would have started with a fire and a big pot called a bogrács. Very similar to the mini one that this recipe is served in.

Then it is simply a case of adding stuff to the pot and allowing it to slowly cook.

The recipe is then gently simmered over time to create a wonderful and simple well-rounded dish.

This recipe comes from the cook at our village day fate. She has been cooking Goulash for more years than I have been alive!

Although I have taken the opportunity to scale it down to feed less than a dozen!

It is important that you do not scorch your paprika because it becomes bitter.

It is also vital that you use water and not stock which adds far too much to this simple soup!

Hungarian food is very much defined by paprika, so let’s start there.

It goes in everything from sausages to porkolt and will be found in breakfast, lunch and dinner dishes!

It is also the defining flavour in paprikash, or paprikás, I have two versions, a chicken paprikash and a catfish paprikash.

If you stumble on Hungarian paprika in the stores csípős denotes spicy édes denotes sweet. For this Hungarian Goulash you need sweet paprika.

Next up the beef, you want anything that can handle long slow cooking. Beef shin is my personal choice!

Finally the vegetables, I have added the traditional parsley root into this dish.

It looks similar to parsnip but it is not as sweet, you could swap this for parsnip or celeriac would be great!

The pepper that goes into this dish would originally have been one called a TV paprika.

Which is a very pale yellow/green, I rarely see them outside of Hungary, so use green instead. Red, orange or yellow peppers are too sweet.

Finally the pasta thing, a controversial addition that divides folk. I personally love it, as do many of my Hungarian neighbours, an equal number find it an afront.

* Almost all Hungarian stores are littered with a variety of great quality bit of pasta usually about 5-10mm long and are the lifeblood of many a soup here. If you have nothing available find some good quality linguini, spaghetti or macaroni and break it into 5-10mm pieces*

Serve with Hot Wax Pepper cut into slices 3-5mm slices on the diagonal, if there is a substitute for this I have no idea what it is. They are delightfully spicy without being rip your face off hot but also substantial enough to add a fresh crunch to the soup.

You could go for some crushed red chilli flakes which I quite often add alongside the pepper. 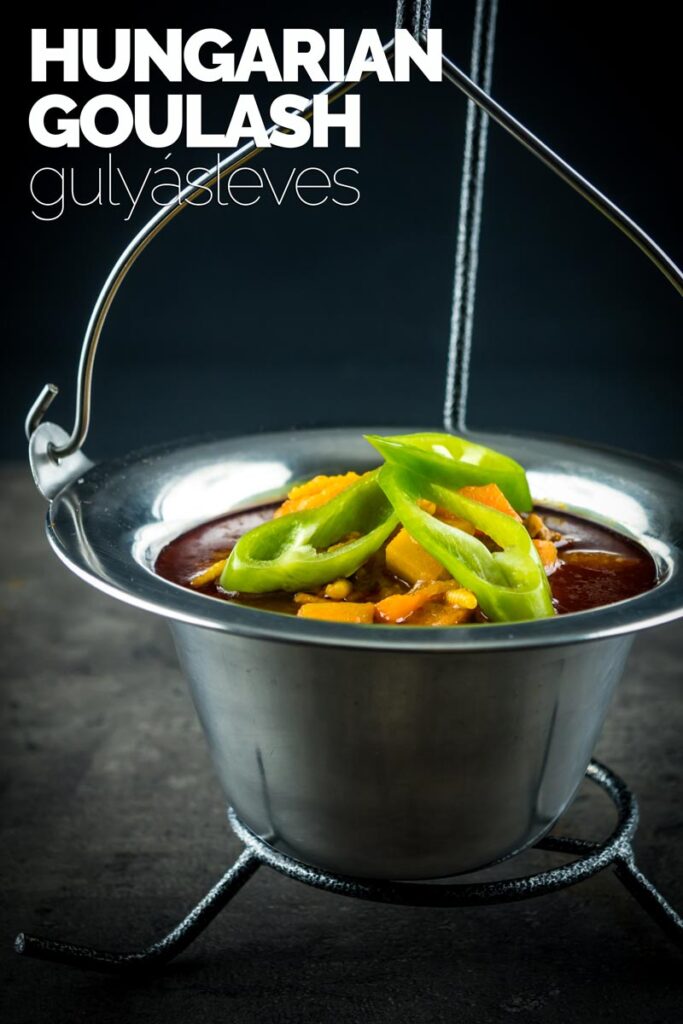 28 thoughts on this Recipe: