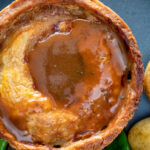 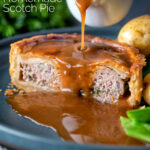 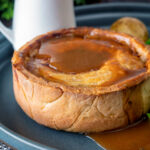 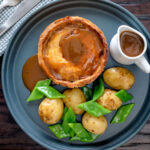 Scotch pie was something I would buy at the footie growing up, a minced lamb pie flavoured with mace and nutmeg in a crisp hot crust pastry.

Now it is much more likely to form the centrepiece of a main meal with some delicious gravy and veg!

To say that we Brits have a “thing” for savoury pies is a bit of an understatement.

As is often with the way of British food our obsession takes many forms. Everything from the classic pork pie or something like a corned beef a potato pie, through to potato topped cottage pie and shepherd’s pie, yes they are different!

Don’t forget pasties, and the king of the pasty world is the Cornish pasty.

A Scotch pie is traditionally filled with lamb or mutton and wrapped in a hot crust pastry case. The pastry I often favour for pies like this and my steak and ale pie.

Flavourings vary from cook to cook although one is more prevalent than all others, that is mace and or nutmeg.

A flavour that is fairly common in British recipes like British sausages through to sausage rolls!

I add a less than typical flavouring in the form of dried mint, I love the stuff and lamb and mint is a match made in heaven.

These Scotch pies can be eaten hot or cold and are just as good as a picnic pie as they are as a main meal or lunchtime snack.

Can I use store-bought pastry?

You can’t really buy hot crust pastry in the stores and these pies really should be made with it. You can get away with making it with shortcrust pastry at a push which is available in stores.

Can I make these in advance?
Yes, once cooked Scotch pies will store in the fridge for 3-4 days and you can reheat them in a moderate oven.

What if I don’t have lamb stock?

I would personally use chicken or vegetable stock, but you could use beef stock or even water.

Can I freeze Scotch pies?

You can freeze the pies unbaked and then bake them from frozen. Form the pies in the tins, then pop them out and freeze them. Cooked pies should be cooled completely before freezing

Check that they are piping hot with a meat thermometer before serving.

As I mention above, Scotch pie was a footie snack growing up, but now I like to serve them hot as part of a main meal.

Here they are served with lamb gravy, and buttered new potatoes and runner beans.

You could even add mushy peas for a proper British experience!

But you can go off in any direction with the vegetables. Glazed Chantenay carrots add a lovely sweetness or you could add some braised cavolo nero to add earthiness.

Adding baked beans would take this pie recipe all the way back to childhood for us Brits!

I tend not to recommend specific branded pieces of equipment unless I think they will have a significant impact on the recipe. If you have any questions feel free to drop a question in the comments section.

Scotch pies are also known as Scottish pies, they are part of a rich culture of British savoury pies. They are filled with minced lamb or mutton flavoured with mace and other herbs and they taste simply stunning!

For the Hot Crust Pastry:

For the Lamb Filling: